Redox flow batteries (RFB) are an energy storage technology initially developed by NASA in the 70's for space applications. After several years of intensive R&D, in 2006, several key patents on the technology expired, opening up the arena to companies all around the world.
In the brand new report by IDTechEx, Redox Flow Batteries 2017-2027: Markets, Trends, Applications, we have analysed the redox flow battery market by talking to key stakeholders and making our own estimates on how it will grow based on a technology and manufacturing readiness analysis. The report comes with a "watch-list" of companies to follow as well as with case studies on the best go-to-market strategies and mistakes to avoid in this field.
The redox flow battery technology, despite higher upfront costs and lower energy density, has a shorter payback time thanks to a good capacity retention even after many thousands of cycles. Additionally, RFBs retain most of their initial value thanks to the possibility to recycle their core components more easily than other battery chemistries. Some RFB chemistries, like that based on vanadium, are already commercial.
IDTechEx predicts that the RFB market will be worth $4B by 2027, and will include all stationary storage applications, from residential to C&I to grid-scale systems. With ambitious projects underway like the massive 200 MW / 800 MWh system under construction in the Dalian peninsula in China, RFBs have the potential to become a mainstream technology that will compete directly with lithium-ion and sodium-sulphur, currently the two leading chemistries in the stationary storage market. RFBs can potentially make second-life Li-ion batteries obsolete by offering a stable cycle life and reduced engineering and BMS challenges. Recycling aspects will ensure that, once out of service, the raw materials will retain most of their value and will be used in brand new RFBs.

The main markets for redox flow batteries. Source: IDTechEx Research (www.IDTechEx.com/redox). For the full chart please purchase the report.
In Redox Flow Batteries 2017-2027: Markets, Trends, Applications, IDTechEx has analysed the five main RFB chemistries:
Other technologies that were the unsuccessful subject of commercialisation in the past are also analysed, to give a full technical overview of what is out there and which chemistries will come out as winners in this arms race. 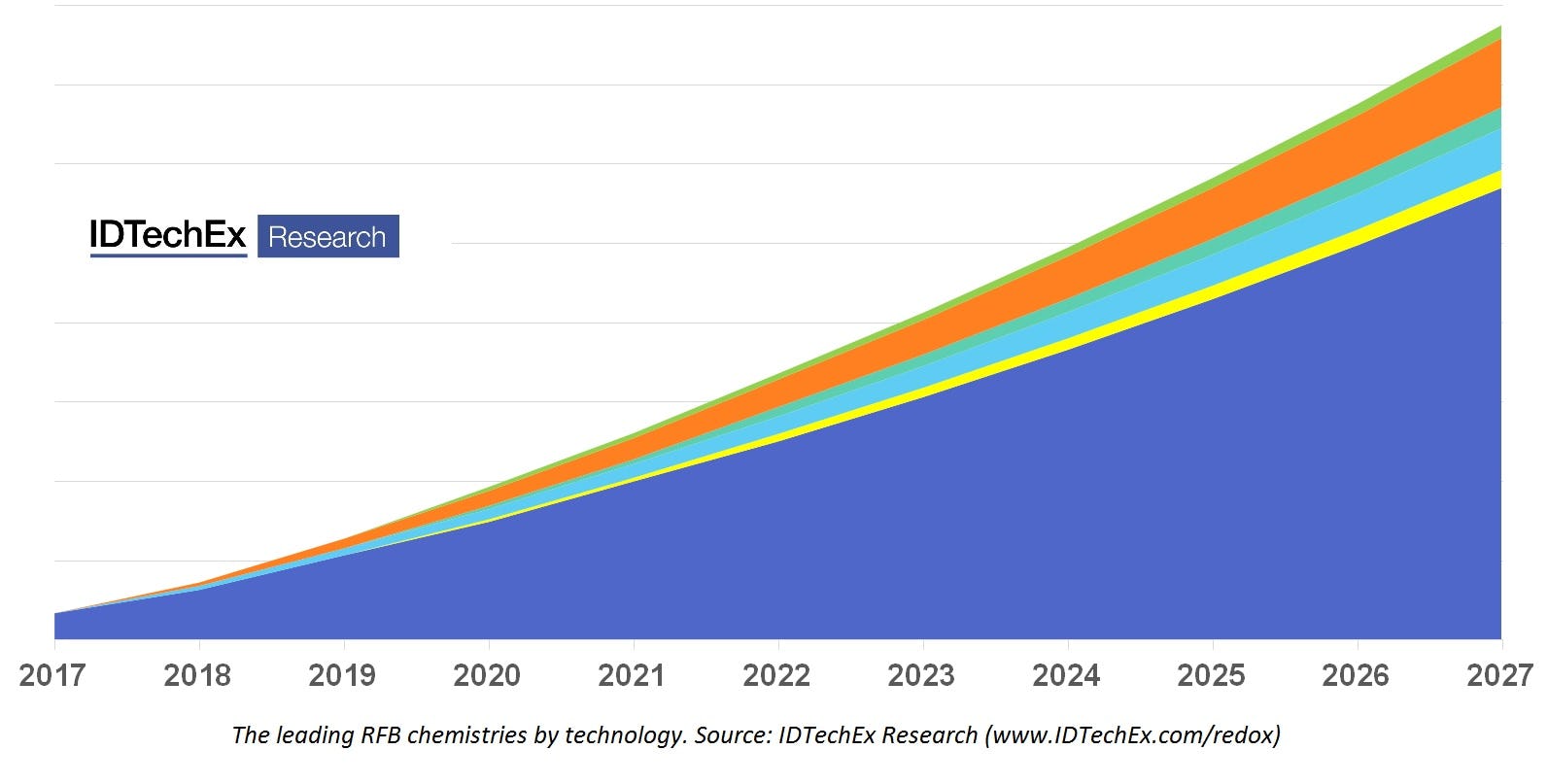 The leading RFB chemistries forecast by technology. Source: IDTechEx Research (www.IDTechEx.com/redox). For the full chart please purchase the report.
The results show that one battery chemistry in particular will lead in terms of megawatt-hours deployed; however, there is room for competition given recent announcements from the major representatives of competing chemistries. Strong trans-pacific partnerships are being formed as a result of China's strong government push into renewables integration and cleantech innovation.
Alternative applications like automotive are also included in the report, with a historic background on previous efforts and an outlook on what some companies like NanoFlowCell are trying to achieve.
By purchasing this report, users will have access to valuable insights into 19 of the largest players in the redox flow battery industry, as well as a techno-economic analysis of the available chemistries, like all-vanadium, all-iron, zinc/bromine, hydrogen/bromine, and organic flow batteries. IDTechEx has outlined how the Li-ion industry will be affected by the emergence of a battery technology that can deliver a long cycle life and solve many safety issues like flammability and short circuits.