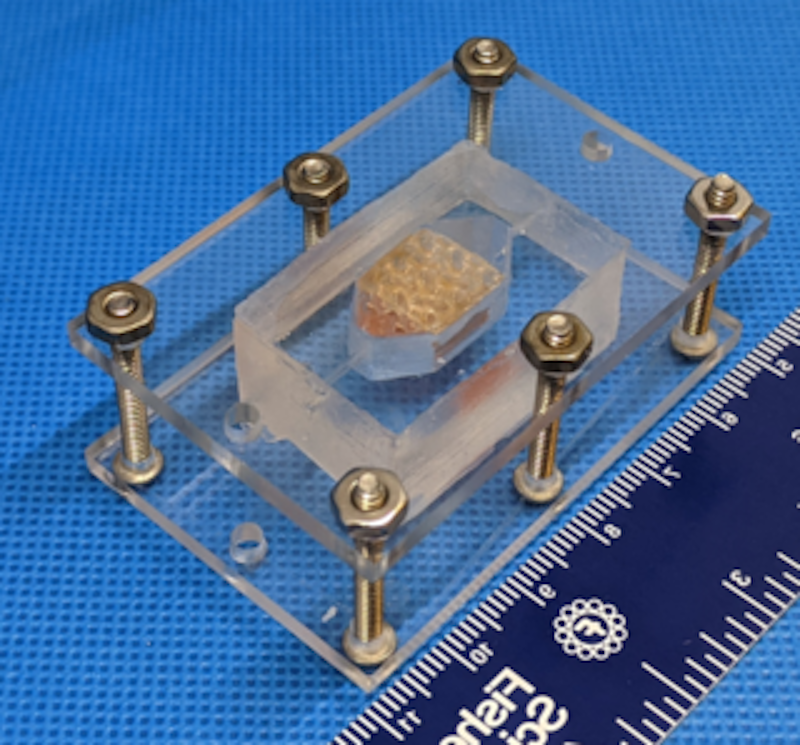 Two teams of scientists from the Wake Forest Institute for Regenerative Medicine (WFIRM) in Winston-Salem, North Carolina, have won first and second place in NASA's Vascular Tissue Challenge. The prize competition aims to accelerate tissue engineering innovations to benefit people on Earth today and space explorers in the future.
Competing as teams Winston and WFIRM, each used a different approach to create lab-grown human liver tissues that were strong enough to survive and function in ways similar to those inside the human body. The teams each used a varied 3D printing technique to construct a cube-shaped tissue about one centimeter thick and capable of functioning for 30 days in the lab. For further information see the IDTechEx report on Tissue Engineering 2018-2028: Technologies, Markets, Forecasts.
Team Winston, the first team to complete its trial under the challenge rules, will receive $300,000 and has the opportunity to advance its research aboard the International Space Station (ISS) U.S. National Laboratory. Team WFIRM will receive the second-place prize of $100,000. Two teams affiliated with other organizations continue to vie for third place and the remaining $100,000.
The research may help enable the growth and long-term survival of thick three-dimensional tissues for research and therapeutic applications, and eventually organ bandages and replacements. In the near term, they could accelerate pharmaceutical testing and disease modeling. And while more advancements are needed to make it a reality, artificial organs developed from a patient's own cells would change lives, reduce transplant waitlists, and help end the organ shortage.
"I cannot overstate what an impressive accomplishment this is. When NASA started this challenge in 2016, we weren't sure there would be a winner," said Jim Reuter, NASA associate administrator for space technology. "It will be exceptional to hear about the first artificial organ transplant one day and think this novel NASA challenge might have played a small role in making it happen."
Tissues in the body rely on blood vessels to supply cells with nutrients and oxygen and remove metabolic waste - a process known as perfusion. As it isn't easy to recreate this process in engineered tissue, NASA asked teams to develop and test strategies for making tissues with functional artificial blood vessels.
The winning teams used 3D printing technologies to create gel-like molds, or scaffolds, with a network of channels designed to maintain sufficient oxygen and nutrient levels to keep the constructed tissues alive for their 30-day trials, as specified in the challenge rules. Winston and WFIRM used different 3D-printed designs and different materials to produce live tissues that harbored cell types found in human livers.
"The value of an artificial tissue depends entirely on how well it mimics what happens in the body," said Lynn Harper, challenge administrator at NASA's Ames Research Center in California's Silicon Valley. "The requirements are precise and vary from organ to organ, making the task extremely exacting and complex. The research resulting from this NASA challenge represents a benchmark, a well-documented foundation to build the next advance upon."
In space, the models could be used to study how radiation exposure affects the human body, document organ function in microgravity, and develop strategies to minimize damage to healthy cells while living or working in space. Microgravity also may facilitate the creation of even larger and more complex engineered tissues that look and function more like those in the human body, compared to tissues constructed on Earth.
The ISS U.S. National Laboratory, which is managed by the Center for the Advancement of Science in Space, will work with team Winston to adapt the winning Earth-based strategy for space. If the research makes it to the station, the combination of improved vasculature and microgravity could yield the next set of advances for tissue engineering on Earth and biomanufacturing in space.
"NASA brings value to our country in various and sometimes unexpected ways," said Reuter. "To see multiple teams succeed in getting a complex 3D tissue composed of multiple human cells to survive and function after a month is amazing and a promising steppingstone for future tissue engineering studies."
Source and top image: NASA