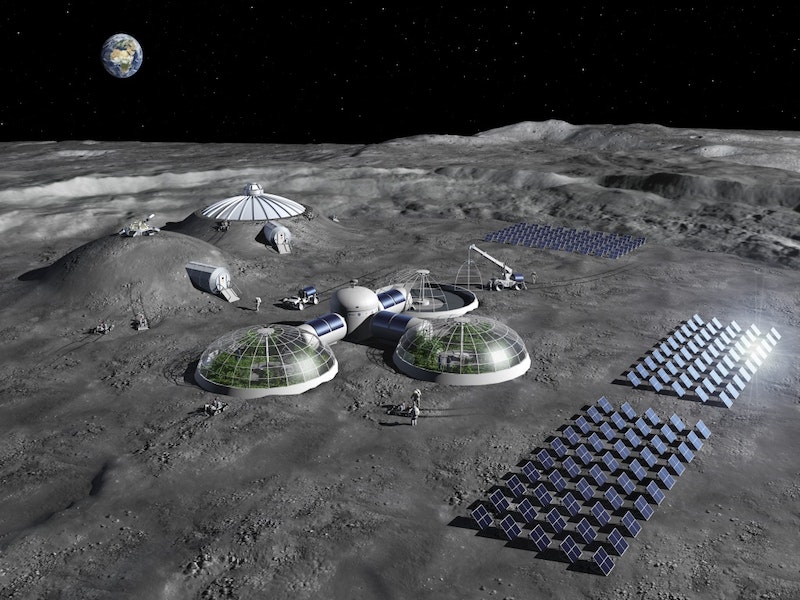 Engineers have successfully shown how water and oxygen can be extracted by cooking up lunar soil, in order to support future Moon bases. A laboratory demonstrator, developed by a consortium of the Politecnico Milano, the European Space Agency, the Italian Space Agency and the OHB Group, is presented this week at the Europlanet Science Congress (EPSC) 2021.
The set-up uses a two-step process, well known in industrial chemistry for terrestrial applications, that has been customised to work with a mineral mixture that mimics the lunar soil. Around 50% of lunar soil in all regions of the Moon is made up of silicon or iron oxides, and these in turn are around 26% oxygen. This means that a system that efficiently extracts oxygen from the soil could operate at any landing site or installation on the Moon.
In the experimental set-up, the soil simulant is vaporised in the presence of hydrogen and methane, then "washed" with hydrogen gas. Heated by a furnace to temperatures of around 1000 degrees Celsius, the minerals turn directly from a solid to a gas, missing out a molten phase, which reduces the complexity of the technology needed. Gases produced and residual methane are sent to a catalytic converter and a condenser that separates out water. Oxygen can then be extracted through electrolysis. By-products of methane and hydrogen are recycled in the system.
"Our experiments show that the rig is scalable and can operate in an almost completely self-sustained closed loop, without the need for human intervention and without getting clogged up," said Prof Michèle Lavagna, of the Politecnico Milano, who led the experiments.
To accurately understand the process and prepare the technology needed for a flight test, experiments have been carried out to optimise the temperature of the furnace, the length and frequency of the washing phases, the ratio of the mixtures of gases, and the mass of the soil simulant batches. Results show that yield is maximised by processing the soil simulant in small batches, at the highest temperatures possible and using long washing phases. The solid by-product is rich in silica and metals that can undergo further processing for other resources useful for in-situ exploration of the Moon.
'The capability of having efficient water and oxygen production facilities on site is fundamental for human exploration and to run high quality science directly on the Moon,' said Lavagna. 'These laboratory experiments have deepened our understanding of each step in the process. It is not the end of the story, but it's very a good starting point.'
Source and top image: Europlanet Society