CubeSat to Assess Origins of Hot Plasma in the Sun's Corona 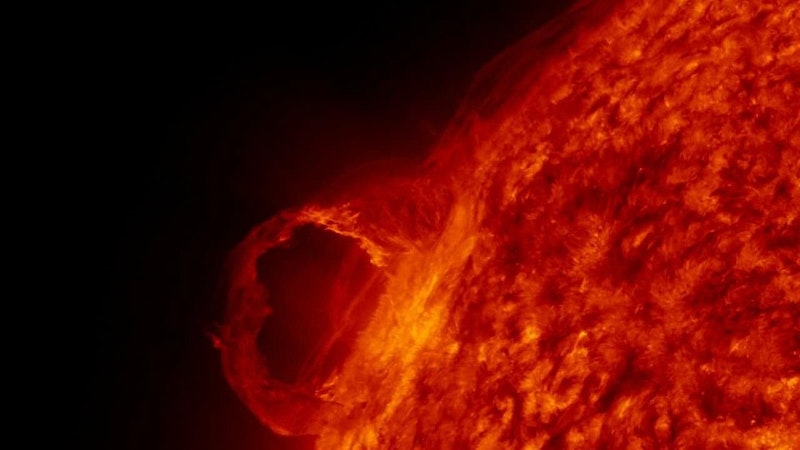 NASA has selected the CubeSat Imaging X-Ray Solar Spectrometer (CubIXSS), led by Southwest Research Institute, to measure the elemental composition of hot, multimillion-degree plasmas in the Sun's corona - its outermost atmosphere. The nanosatellite is expected to be launched in 2024 as a secondary payload on another satellite launch. CubIXSS will determine the origins of hot plasma - highly ionized gas - in solar flares and active regions.
Concentrations of strong and complicated magnetic fields at the surface of the Sun are called "active regions." These regions frequently spawn strong solar activity including explosive "solar storms" such as solar flares and coronal mass ejections (CMEs).
"A solar flare happens because the magnetic field in that active region has become so twisted and tangled that it basically 'snaps' back into a less tangled shape," said SwRI Principal Scientist Dr. Amir Caspi, the mission's leader. "That snap releases a lot of energy, which we see as a solar flare."
The solar flare heats the Sun's plasma in that region to heat up to tens of millions of degrees Celsius. That is considerably hotter than the rest of the Sun's corona, which typically ranges from 1 to a few million degrees, and much hotter than the Sun's surface, which is only about 6000 degrees.
"One of the interesting things we don't really know is how much plasma in solar flares is heated directly in the corona, and how much is heated in the Sun's lower atmosphere and then transported up to the corona," Caspi said. "CubIXSS will measure the X-rays that come from these phenomena, to allow us to unravel this mystery."
A standard CubeSat is a 10-centimeter cube with a one-liter volume, referred to as "1U." CubIXSS takes up six of these units, or 6U, about the size of a shoebox or two loaves of bread. It will carry multiple spectrometers to measure different wavelengths, or "colors," of X-rays from the Sun, including a new kind of X-ray imaging spectrometer to determine the amounts of certain key elements in the Sun's corona, which will in turn allow Caspi to identify where that plasma was heated.
"Some elemental species - certain ions - can only exist in a specific range of temperatures, so seeing which elements are more prevalent helps us to create a temperature map," Caspi said. "Previous observations have shown a higher proportion of certain elements in the corona than other regions of the Sun. By measuring the abundances of these elements at each temperature, we'll be able to tell where the heated plasma came from."
CubIXSS will be the first device of its kind to routinely measure certain wavelengths of solar X-ray emissions, which not only help to determine the abundances of solar elements but also have a direct impact on the Earth. X-rays from the Sun can contribute to expansion of Earth's upper atmosphere, which can cause increased drag on satellites in low orbits and alter their trajectories. They also cause changes in Earth's ionosphere, a charged region in the upper atmosphere, that can affect radio communications.
"Even though it might seem like what we're doing is very academic, studying the Sun is very important for people living on Earth. It drives almost everything that happens on our planet," Caspi said. "CMEs and solar flares can impact satellites and radio frequencies, disrupting communications both on Earth and to satellites in space. Understanding how these things happen is very important to understanding why they happen, which will help us predict these 'space weather' events and mitigate their effects."
Work is set to begin on CubIXSS in late 2021, with a projected launch date of late 2024. CubIXSS includes major instrument contributions from NASA's Goddard Space Flight Center and the Laboratory for Atmospheric and Space Physics at the University of Colorado Boulder. SwRI is also partnering with the Naval Research Laboratory, Lockheed Martin Solar and Astrophysics Laboratory, the Polish Academy of Sciences Space Research Centre, and the MIT Lincoln Laboratory for critical science support.
Source: Southwest Research Institute
Top image: Pixabay