Making Space Travel Inclusive for All 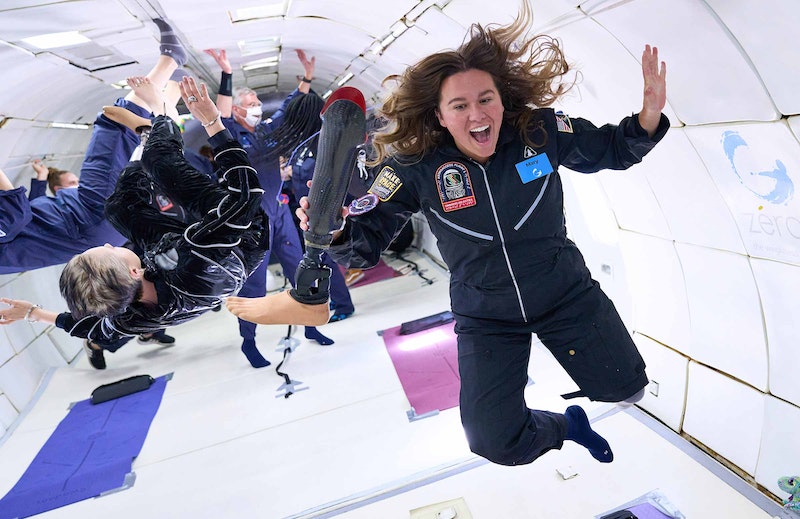 In a weightless, microgravity environment like space, what do ability and disability look like? How can someone with partial sight or impaired mobility navigate in a confined space like the space station? As scientists and innovators continue to push the boundaries of spaceflight and the possibility of human life on other planets, how can we build space infrastructure that is inclusive of all humans?
The Mission: AstroAccess project aims to answer these questions, starting with a historic parabolic flight that took off from Long Beach on Oct. 17, 2021. A group of 12 disabled scientists, veterans, students, athletes and artists launched into a zero-gravity environment as a first step toward understanding what is needed to make space inclusive for all.
"The whole point of this project is to demonstrate that people with disabilities are able to fly safely into space," said Dr. Erik Viirre, director of The Arthur C. Clarke Center for Human Imagination at the University of California San Diego, and a neurologist at UC San Diego Health. Viirre served as medical and flight operations lead for the AstroAccess flight, ensuring a safe environment for all 12 AstroAccess Ambassadors and their partners on board. "What we're working on in this initial flight are demonstrations of a variety of different tasks that our Ambassadors will have to carry out, including navigating up, down, left and right; clear communication; and being able to move to a set location."
In addition to Viirre, aerospace engineering student Brenda Williamson, the former president of the UC San Diego chapter of the American Institute of Aeronautics and Astronautics (AIAA), served as head of the logistics committee in preparation for the flight.
The AstroAccess project is led by a group of scientists, engineers, and social workers with a common goal: inclusive space exploration. In the United States, 26% of the population has a disability, yet people with disabilities make up only 8.4% of the country's employed scientists and engineers. AstroAccess wants to make STEM, and space, accessible to this large portion of the population.
To get a better idea of what is needed for more inclusive space travel, AstroAccess plans to conduct a series of follow-on parabolic flights after this inaugural launch. On these flights, conducted by the Zero Gravity Corporation (Zero-G), a plane equipped with a special padded section flies up to an altitude of around 32,000 feet and then begins a rapid descent at about 4 miles per second. This quick descent creates a free fall, or microgravity, weightless effect lasting roughly 30 seconds. Afterwards, the plane climbs back up to a stable altitude, and repeats the process again. On the Oct. 17 flight, the process was repeated roughly 15 times.
The 12 AstroAccess Ambassadors selected for this first microgravity flight included four blind or low-vision Ambassadors; two deaf or hard-of-hearing Ambassadors; and six Ambassadors with mobility disabilities, all carrying out a variety of tasks and challenges in the weightless environment. One of the challenges was seeing whether all crew members could perform basic safety and operational tasks, like navigating to oxygen masks. The crew also tested a procedure to see whether sound beacons can be used for blind members to orient themselves, and the effectiveness of haptic devices in communicating commands. They're also investigating how American Sign Language will be impacted by microgravity.
When it comes to the physiology of microgravity and understanding how the human body is affected, Viirre has a wealth of information and experience. This wasn't his first flight with Zero-G; Viirre was also the chief medical officer in charge of Stephen Hawking's microgravity flight in 2007, and has served as CMO on several gravity-free flights for people with disabilities since. The Arthur C. Clarke Center for Human Imagination at UC San Diego is an official sponsor of the AstroAccess program.
"We still have lots of things to learn about traveling in space," he said. "Our destiny really is out there."
Williamson, an aerospace engineering student at UC San Diego, has been involved with the project for months now, working to ensure the October launch went off without a hitch.
"As the lead of logistics, I manage all of the nitpicky details we need to know for our five-day trip in Long Beach, including transportation, food, catering, ASL interpreters and company tours," Williamson said. "We're doing quite a bit these few days and it's my job to make sure we make that all happen."
As former president of the AIAA chapter at UC San Diego, Williamson was responsible for hosting events with guest speakers, organizing club trips, and planning events to help prepare students for graduate school or industry jobs. She believes that this helped her prepare for her role with AstroAccess. For her, contributing to AstroAccess' goal is also personal.
"My whole career goal is to make the average person able to go to outer space, where you don't have to be a crazy trained astronaut with impeccable physical abilities and health to visit outer space," she said. "I grew up on Star Trek, so the idea of exploration is really important to me."
Source and top image: UC San Diego