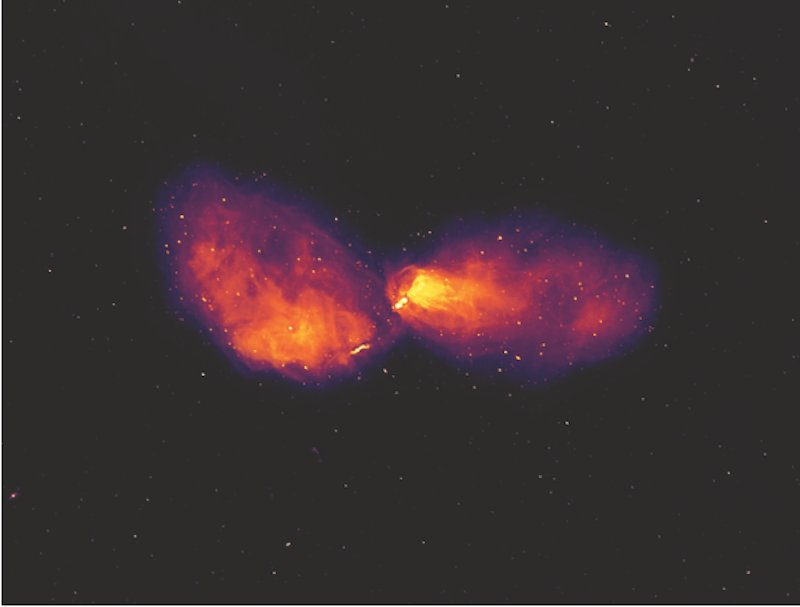 Astronomers have produced the most comprehensive image of radio emission from the nearest actively feeding supermassive black hole to Earth. The emission is powered by a central black hole in the galaxy Centaurus A, about 12 million light years away.
As the black hole feeds on in-falling gas, it ejects material at near light-speed, causing 'radio bubbles' to grow over hundreds of millions of years. When viewed from Earth, the eruption from Centaurus A now extends eight degrees across the sky—the length of 16 full Moons laid side by side. It was captured using the Murchison Widefield Array (MWA) telescope in outback Western Australia.
Lead author Dr Benjamin McKinley, from the Curtin University node of the International Centre for Radio Astronomy Research (ICRAR), said the image reveals spectacular new details of the radio emission from the galaxy. "These radio waves come from material being sucked into the supermassive black hole in the middle of the galaxy," he said. "It forms a disc around the black hole, and as the matter gets ripped apart going close to the black hole, powerful jets form on either side of the disc, ejecting most of the material back out into space, to distances of probably more than a million light years. Previous radio observations could not handle the extreme brightness of the jets and details of the larger area surrounding the galaxy were distorted, but our new image overcomes these limitations."
Centaurus A is the closest radio galaxy to our own Milky Way.
"We can learn a lot from Centaurus A in particular, just because it is so close and we can see it in such detail," Dr McKinley said. "Not just at radio wavelengths, but at all other wavelengths of light as well. In this research we've been able to combine the radio observations with optical and x-ray data, to help us better understand the physics of these supermassive black holes."
Astrophysicist Dr Massimo Gaspari, from Italy's National Institute for Astrophysics, said the study corroborated a novel theory known as 'Chaotic Cold Accretion' (CCA), which is emerging in different fields. "In this model, clouds of cold gas condense in the galactic halo and rain down onto the central regions, feeding the supermassive black hole," he said. "Triggered by this rain, the black hole vigorously reacts by launching energy back via radio jets that inflate the spectacular lobes we see in the MWA image. This study is one of the first to probe in such detail the multiphase CCA 'weather' over the full range of scales", Dr Gaspari concluded.
Dr McKinley said the galaxy appears brighter in the centre where it is more active and there is a lot of energy.
"Then it's fainter as you go out because the energy's been lost and things have settled down," he said. "But there are interesting features where charged particles have re-accelerated and are interacting with strong magnetic fields."
MWA director Professor Steven Tingay said the research was possible because of the telescope's extremely wide field-of-view, superb radio-quiet location, and excellent sensitivity.
"The MWA is a precursor for the Square Kilometre Array (SKA)—a global initiative to build the world's largest radio telescopes in Western Australia and South Africa," he said. "The wide field of view and, as a consequence, the extraordinary amount of data we can collect, means that the discovery potential of every MWA observation is very high. This provides a fantastic step toward the even bigger SKA."
The Murchison Widefield Array is the MWA is managed and operated by Curtin University on behalf of an international consortium, and is located on the Murchison Radio-astronomy Observatory in Western Australia. The observatory is managed by CSIRO, Australia's national science agency, and was established with the support of the Australian and Western Australian Governments. We acknowledge the Wajarri Yamatji as the traditional owners of the observatory site.
The Pawsey Supercomputing Research Centre in Perth-a Tier 1 publicly funded national supercomputing facility-helped store and process the MWA observations used in this research.
Source and top image: International Centre for Radio Astronomy Research
​