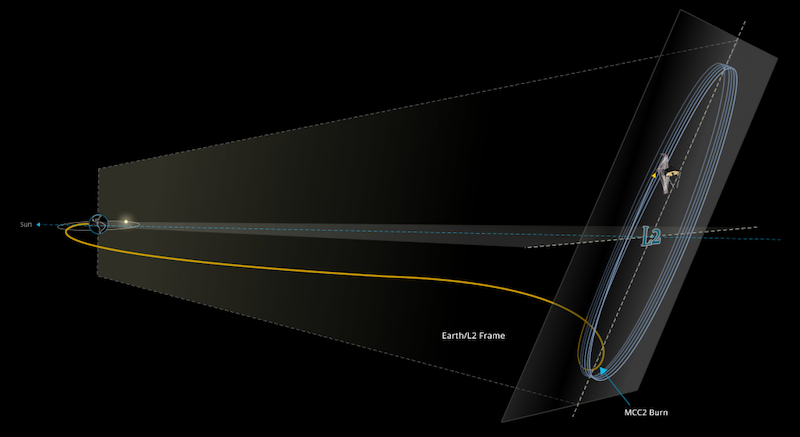 on Monday at 2 p.m. EST, James Webb Space Telescope (Webb) fired its onboard thrusters for nearly five minutes (297 seconds) to complete the final postlaunch course correction to Webb's trajectory. This mid-course correction burn inserted Webb toward its final orbit around the second Sun-Earth Lagrange point, or L2, nearly 1 million miles away from the Earth. The final mid-course burn added only about 3.6 miles per hour (1.6 meters per second) - a mere walking pace - to Webb's speed, which was all that was needed to send it to its preferred "halo" orbit around the L2 point.
"Webb, welcome home!" said NASA Administrator Bill Nelson. "Congratulations to the team for all of their hard work ensuring Webb's safe arrival at L2 today. We're one step closer to uncovering the mysteries of the universe. And I can't wait to see Webb's first new views of the universe this summer!"
Webb's orbit will allow it a wide view of the cosmos at any given moment, as well as the opportunity for its telescope optics and scientific instruments to get cold enough to function and perform optimal science. Webb has used as little propellant as possible for course corrections while it travels out to the realm of L2, to leave as much remaining propellant as possible for Webb's ordinary operations over its lifetime: station-keeping (small adjustments to keep Webb in its desired orbit) and momentum unloading (to counteract the effects of solar radiation pressure on the huge sunshield).
"During the past month, JWST has achieved amazing success and is a tribute to all the folks who spent many years and even decades to ensure mission success," said Bill Ochs, Webb project manager at NASA's Goddard Space Flight Center. "We are now on the verge of aligning the mirrors, instrument activation and commissioning, and the start of wondrous and astonishing discoveries."
Now that Webb's primary mirror segments and secondary mirror have been deployed from their launch positions, engineers will begin the sophisticated three-month process of aligning the telescope's optics to nearly nanometer precision.
Source and top image: NASA