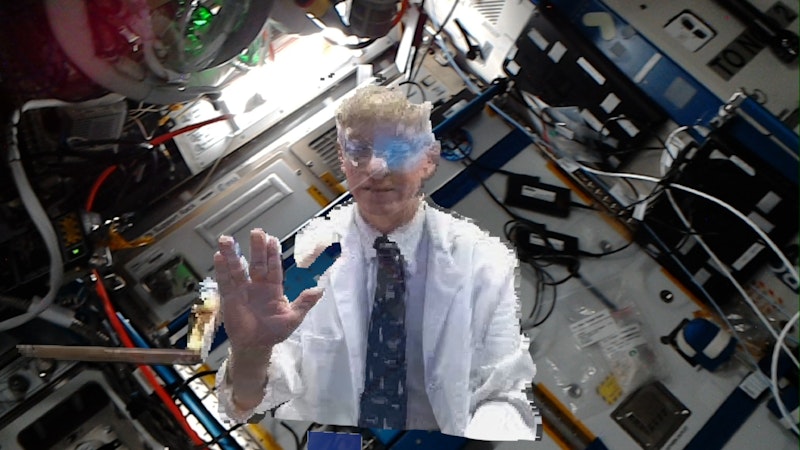 During almost two-years of the COVID-19 pandemic, the growth of telemedicine and new ways of reaching people has changed and developed. In October 2021, NASA flight surgeon Dr. Josef Schmid, industry partner AEXA Aerospace CEO Fernando De La Pena Llaca, and their teams were the first humans "holoported" from Earth into space.
Using the Microsoft Hololens Kinect camera and a personal computer with custom software from Aexa, ESA (European Space Agency) astronaut Thomas Pesquet had a two-way conversation with live images of Schmid and De La Pena placed in the middle of the International Space Station. This was the first holoportation handshake from Earth in space.
Holoportation is a type of capture technology that allows high-quality 3D models of people to be reconstructed, compressed and transmitted live anywhere in real time, Schmid said. When combined with mixed reality displays such as HoloLens, it allows users to see, hear, and interact with remote participants in 3D as if they are actually present in the same physical space. Holoportation has been in use since at least 2016 by Microsoft, but this is the first use in such an extreme and remote environment such as space.
"This is completely new manner of human communication across vast distances," Schmid said. "Furthermore, it is a brand-new way of human exploration, where our human entity is able to travel off the planet. Our physical body is not there, but our human entity absolutely is there. It doesn't matter that the space station is traveling 17,500 mph and in constant motion in orbit 250 miles above Earth, the astronaut can come back three minutes or three weeks later and with the system running, we will be there in that spot, live on the space station."
NASA is demonstrating this new form of communication as a precursor for more extensive use on future missions. Plans are to use this next with two-way communication, where people on Earth are holoported to space and astronauts are placed back on earth. "We'll use this for our private medical conferences, private psychiatric conferences, private family conferences and to bring VIPs onto the space station to visit with astronauts."
The next step after that is to combine holoportation with augmented reality, to truly enable Tele-mentoring. For further information see the IDTechEx report on Augmented, Mixed and Virtual Reality 2020-2030: Forecasts, Markets and Technologies.
"Imagine you can bring the best instructor or the actual designer of a particularly complex technology right beside you wherever you might be working on it. Furthermore, we will combine augmented reality with haptics. You can work on the device together, much like two of the best surgeons working during an operation. This would put everyone at rest knowing the best team is working together on a critical piece of hardware," Schmid said.
Holoportation and tools like it could have great implications on the future of deep space travel. As plans shape up for missions to Mars, an obstacle to overcome will be the communication delays that are present during the travel to and from Mars. A delay of up to 20 minutes each way will present a unique challenge to communication whether through simple radio transmissions, video streams or new methods such as Holoportation. Communication is critical, whether for medical or mission support reasons, or staying in touch with family members. The crew will need to be connected with Earth and Mission Control, no matter where humans explore.
There are also direct applications here on Earth. Whether in other extreme environments such as Antarctica, offshore oil rigs or military operation theaters, this type of technology may help people in such situations communicate, bringing people together no matter the distance or environmental challenges.
Source and top image: NASA