First All Private Astronaut Mission to ISS is a Success 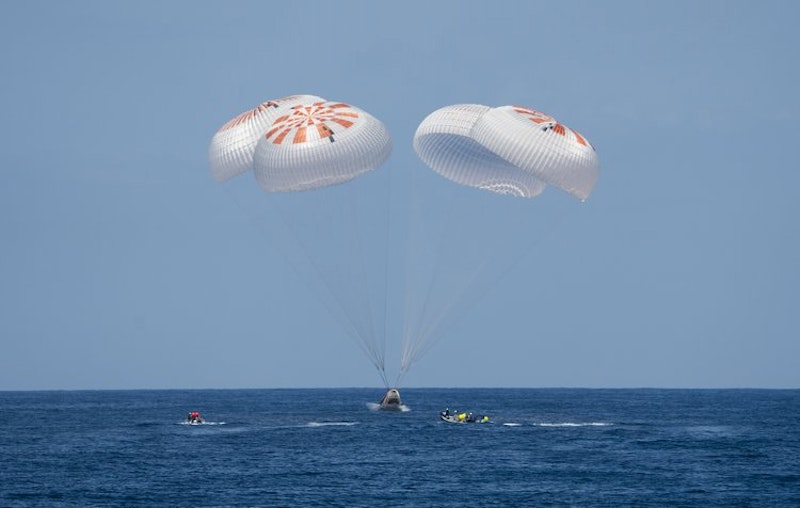 The Axiom Mission 1 (Ax-1) crew and the SpaceX Dragon spacecraft safely splashed down off the coast of Florida yesterday. The Ax-1 crew's arrival back to Earth officially concludes the first all-private astronaut mission to the International Space Station (ISS), successfully demonstrating Axiom Space's ability to integrate with the ISS and conduct meaningful research.
During their 17-day mission, Ax-1 Commander Michael López-Alegría, Pilot Larry Connor, and Mission Specialists Eytan Stibbe and Mark Pathy worked aboard the orbiting laboratory for 15 days. They flew approximately 6.3 million miles, about 240 orbits of Earth. Among the many highlights:
In keeping with the mission's emphasis on scientific discovery, within hours of splashdown and recovery, the astronauts will take part in post-flight studies such as providing biomedical and physiological data for researchers at the Translational Research Institute for Space Health to gauge the effects of spaceflight on the human body, including changes in vision, balance, and perception.
"Axiom Space is incredibly proud of this mission and these astronauts, whose training rigor and commitment to a robust research portfolio set the standard for future private spaceflight," said Michael Suffredini, President and CEO of Axiom Space. "The Ax-1 mission is a pathfinder, showing the value of this new method of access to orbit and progress toward Axiom Station, a next generation platform in which the benefits and products of life, work and research in space will be available to a greater number of people."
Ax-1 is the first of several planned Axiom missions to the ISS and is an important step for Axiom Station, the first commercial space station that will serve as a global academic and commercial hub. The success of Ax-1 provides valuable insight as Axiom Space works toward Axiom Mission 2 (Ax-2), the details of which Axiom Space is negotiating with NASA.
"The success of this first private astronaut mission to the International Space Station is an important step in opening opportunities for space travelers and achieving NASA's goal of enabling commercial business off the planet in low-Earth orbit," said NASA Administrator Bill Nelson. "This progress has been made possible by NASA's work with private industry - especially the Commercial Crew Program. I'm incredibly proud of the NASA, SpaceX, and Axiom teams for safely completing this landmark mission. Welcome home, Ax-1!"
SpaceX's Falcon 9 launched Dragon and the Ax-1 crew to the ISS on Friday, April 8. Seventeen days later, Dragon and the Ax-1 crew undocked from the space station on Sunday April 24. The Ax-1 mission, the first all-private mission with a commercial spacecraft, highlights the important role of commercial companies to expand access to low-Earth orbit. Ax-1 represents the first of four private human spaceflights that Axiom Space has contracted with SpaceX to transport the crew to and from the orbiting laboratory.
Source and top image: Axiom