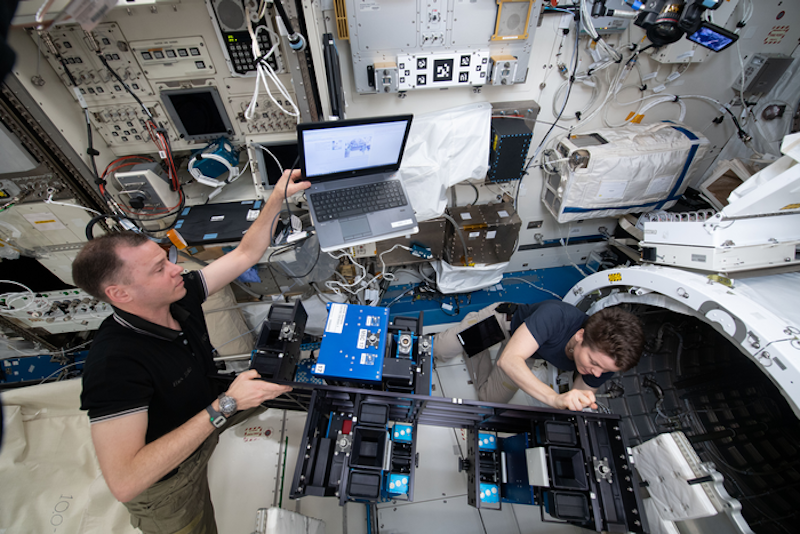 Space may look empty, but it contains extreme temperatures, high levels of background radiation, micrometeoroids, and the unfiltered glare of the Sun. In addition, materials and equipment on the outside of the International Space Station are exposed to atomic oxygen (AO) and other charged particles as it orbits the Earth at the very edge of our atmosphere. Only the hardiest materials, equipment, and organisms can withstand this harsh environment, and scientists conducting research on the orbiting laboratory have identified some of them for a variety of potential uses.
"There are ways to test the various components of space exposure individually on the ground, but the only way to get the combined effect of all of them at the same time is on orbit," says Mark Shumbera of Aegis Aerospace, which owns and operates the MISSE Flight Facility (MISSE-FF), a platform for space exposure studies on station. "That's important because combined effects can be very different from individual ones."
Missions launch about every six months to MISSE-FF, which is sponsored by the ISS National Lab. Experiments began when the platform was installed in 2018 and will continue for the life of the space station, Shumbera says. A previous MISSE facility operating from 2001 until 2016 hosted the first station-based exposure experiments. Some of these missions help researchers understand how new technologies react to the space environment. "Before using a technology on an operational satellite or vehicle, you want some confidence that it will perform the way you think it will in the space environment," he says.
MISSE-FF has high-definition cameras that take periodic photos of all items on its exposure decks and sensors to record environmental conditions such as temperature, radiation, and UV and AO exposure. All test articles are brought back to the ground for postflight analysis as well. NASA scientists have flown multiple missions on the MISSE-FF to analyze the effects of atomic oxygen and radiation on hundreds of samples and devices.
MISSE-9, for example, assessed how polymers, composites, and coatings handled exposure to space. For this and other MISSE missions, Kim de Groh, senior materials research engineer at NASA's Glenn Research Center in Cleveland, tests two primary environmental degradation effects. The first is how quickly a material erodes due to AO interaction. She measures loss of mass in space-exposed materials and uses that information to compute AO erosion yield values. These values help spacecraft designers determine whether specific materials are suitable for use and how thick those materials need to be.
Materials used as spacecraft insulation can become brittle in space due to radiation and temperature cycling on orbit. This embrittlement can create cracks and cause problems such as a spacecraft component overheating. De Groh also tests the durability of different materials to find those that resist becoming brittle.
"The ideal situation is to actually expose samples to space, to experience all the harsh environment conditions at the same time," de Groh says.
The EXPOSE-R-2 facility from ESA (European Space Agency) is another platform that offers scientists the opportunity to test samples in space. ESA investigations that have used the facility include BOSS and BIOMEX, which exposed biofilms, biomolecules, and extremophiles to space and Mars-like conditions. Extremophiles are organisms that can live in conditions intolerable or even lethal for most forms of life.
Increasing autonomy is critical to future missions that travel farther from Earth and cannot rely on resupply missions. Microorganisms that are tolerant of extreme conditions have potential uses in life support systems for such missions, according to Daniela Billi, a professor in the biology department of the University of Rome Tor Vergata and an investigator for BOSS and BIOMEX. For example, cyanobacteria can use available resources to fix carbon (convert atmospheric carbon dioxide into carbohydrates) and produce oxygen.
During exposure on the space station, dried Chroococcidiopsis cells received an ionizing radiation dose equivalent to a trip to Mars. Their response suggests that the bacteria could be transported to the planet and rehydrated on demand. The dried cells also were mixed with a simulant of Martian regolith or dust and received a UV dose corresponding to about 4 hours of exposure on the Martian surface.
"The aim of this study was to verify whether this cyanobacterium could repair DNA damage accumulated during travel to Mars and exposure to unattenuated Mars conditions," says Billi.
Recently published results suggest that they can: DNA sequencing of cells rehydrated after exposure showed no increase in mutation rate compared to controls grown under Earth conditions. This result increases the potential for using this organism to employ resources available on site to support human settlements.
Another investigation using the EXPOSE-R-2 facility found signs of life in melanin-containing fungi after 16 months of exposure to space. Fungal melanin pigment seems to play a role in cellular resistance to extreme conditions, including radiation, and may have potential for use as radiation protection on future deep space missions. In the experiment, a thin layer of one strain of melanized fungus decreased radiation levels by almost 2% and potentially as much as 5%.
In addition to fungi, researchers used the ESA platform to expose the resting stages of some 40 species of multicellular animals and plants to space for the EXPOSE-R IBMPinvestigation. Results showed that many of these organisms remained viable and even completed life cycles and reproduction for several generations, suggesting future voyages to other planets could take along terrestrial life forms for use in ecological life-support systems and for creating artificial ecosystems.
As humans explore farther into space and stay there longer, tests performed on the space station's exposure platforms help ensure the materials and systems they take along are up for the trip.
Source: NASA/Johnson Space Centre