2.5-Billion Pixel Image of Mars is the Most Detailed Ever 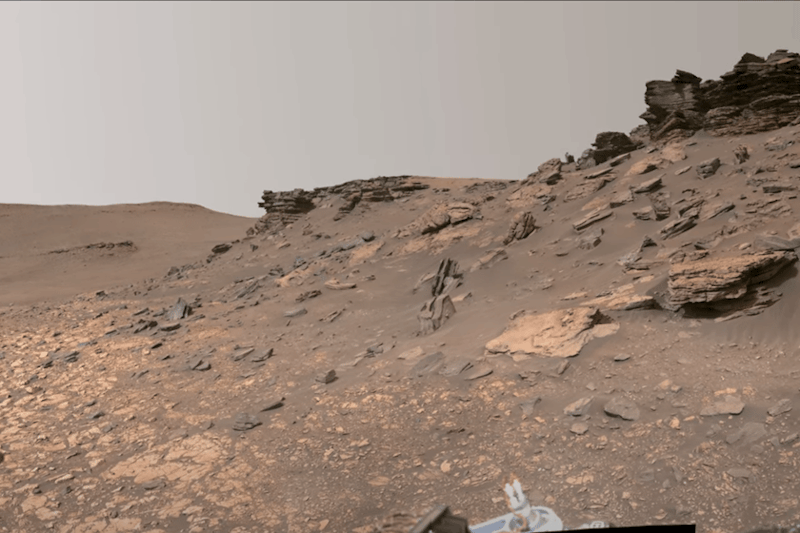 NASA's Perseverance Mars Rover has arrived at an ancient delta in Jezero Crater, one of the best places on the Red Planet to search for potential signs of ancient life. The delta is an area where scientists surmise that a river once flowed billions of years ago into a lake and deposited sediments in a fan shape.
Rachel Kronyak, a member of the Perseverance science operations team, guides the viewer through this Martian panorama and its intriguing sedimentary rocks. It's the most detailed view ever returned from the Martian surface, consisting of 2.5 billion pixels and generated from 1,118 individual Mastcam-Z images. Those images were acquired on June 12, 13, 16, 17, and 20, 2022 (the 466th, 467th, 470th, 471st, and 474th Martian day, or sol, of Perseverance's mission). In this panorama, an area called Hogwallow Flats is visible, as is Skinner Ridge, where two rock core samples were taken.
The color enhancement in this image improves the visual contrast and accentuates color differences. This makes it easier for the science team to use their everyday experience to interpret the landscape.
TRANSCRIPT
Rachel Kronyak, Perseverance science operations team:
This beautiful mosaic is the most detailed image ever taken on the surface of Mars. It captures some of the sedimentary rocks that scientists came to the Red Planet to study. Only the very edges of the rover are visible in this mosaic. NASA's Perseverance Mars rover is now exploring a really important part of Jezero crater. Around 3.5 billion years ago, a river flowed into Lake Jezero, depositing mud and sand on the crater floor, forming an ancient delta.
What you see are some of the hills and cliffs at the edge of that delta. Here you can see some of Perseverance's wheel tracks showing where we came from on the crater floor where we spent the first year of our mission.
Take a look at the darker gray, layered rocks that make up the roughly 32 foot tall cliff in front of the rover. You can see very clear horizontal layers in these rocks. And you'll also notice pieces of the cliff have broken off and tumbled downhill. One of the more interesting ones is the three foot tall boulder called Betty's Rock, which Perseverance was able to get a closer look at.
These rocks have been sitting on the surface of Mars for billions of years, and over that time, wind erosion has shaped the surface into pretty interesting forms like this balanced rock. Immediately surrounding the rover is an area called Hogwallow Flats, previously known as the Bacon Strip. Based on its appearance in orbital images, take a look at the bright rocks the rover is sitting on.
We think these are some of the finest grained sedimentary rocks deposited in the Delta. Fine grain rocks are important because they're typically really good places to look for signs of ancient life. We'd plan to do up to five abrasions on the rocks in this area. That's where we use our drill to expose a fresh surface, which allows us to analyze the chemistry and mineralogy.
But Mars threw some curveballs, and these softer rocks didn't always cooperate. Here you can see the results of one of our abrasion attempts. The rock crumbled during the abrasion, preventing us from analyzing the spot. We had two unlucky abrasion attempts in this area before achieving success at the Skinner Ridge outcrop. Here we collected our first two rock core samples from the Delta, and since then we've collected two more.
Perseverance drove to the Delta because it is a very promising place to look for signs of ancient life. We hope to learn more when a future mission brings these samples back to Earth. So far, we're excited by what we've collected.
Souce: NASA